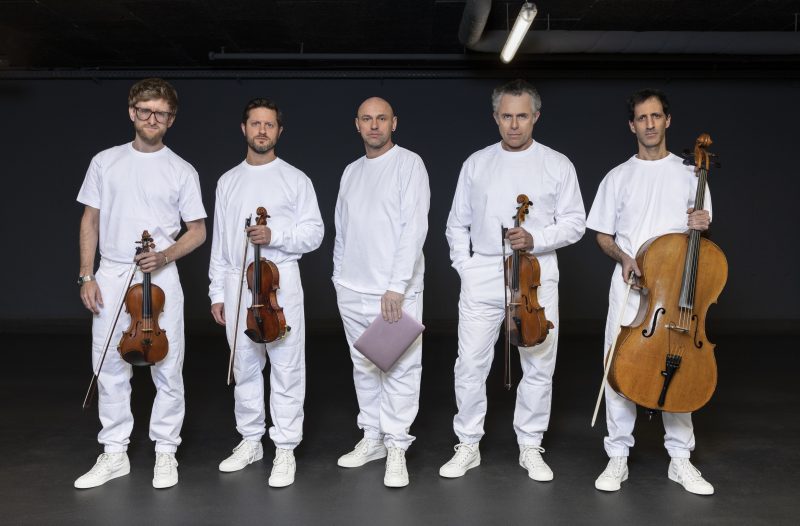 On the 24thMay 2019, Henrik Schwarz & Alma Quartet have released CCMYK, a new album on his own label Between Buttons. Produced in collaboration with the Alma String Quartet, it’s a free conversation between classical and electronic musics, carefully transformed into a set of astonishing tracks, ready for club or concert hall.

Schwarz has been exploring this fertile terrain between classical, electronic and dance music for almost a decade. Having produced some of the most elegant dance records of the 2000s, he has spent much of his 2010s collaborating with jazz musicians, orchestras, writing ballets, and recon guring canonical classical works.

The story of CCMYK is the story of chance, communication and control. In 2013, after performing with the Dutch Chamber Orchestra in Amsterdam, Henrik was approached by Marc Daniel of the Alma String Quartet. In 2015, Henrik invited the four players to his studio in Berlin, where they began a series of improvisations. Henrik would suggest a musical phrase, and one of the Alma Quartet would play in response, with another then taking up the idea: highly trained classical musicians recording like a jazz band. Schwarz would record, replay and respond to their classical phrases with his own electronic production. These half hour jams would then be taken home by Henrik. There, he would edit them down, sculpting their form into coherent tracks. During this process he added electronic melodies and beats, even inviting the players back to respond again, thus building and re ning these variations on a theme until the songs were fully formed.

“I love nding the essence of something,” says Schwarz. “I see it like working on a sculpture that someone else began, and to make it visible, you have to cut away until you can see what’s really there. So you nd this balance between free and controlled. We would begin with this totally open vibe, and condense the freeform music into this nished work.”

Though based on free improvisations, CCMYK is not a record of bumbling jams. Rather, it’s a record of startling density, control and emotional complexity. It opens with the ourish of strings: a looped violin, a plucked double bass, interwoven with subtle electronic effects. Throughout the album, piercing melancholy and graceful tension merges with ashes of radiant joy. Dynamic, driving soundscapes like CCMYK3 sound almost ready for the club, while Happy Hipster’s Spring-like verve turns into full, dazzling and almost sorrowful Summer, a tonal shift of which any composer would be proud.

This is the sound of open conversation between piercing intellects, taking their individual instruments and musical backgrounds to create a universe of sound. Perhaps this is the meaning of the album title: three primary colours and a key that combine to bring any image imaginable to life. For the live show, Schwarz has even reimagined the building blocks of both a club and an orchestra. Instead of a conventional loudspeaker, he has remade a cello to amplify his electronic effects. In place of a metronome, the group will look to an automated needle on a display, directed by Schwarz, keeping time with the sensitivity and feeling of a conductor.

“This synthesis of classical and electronic is not only about music. It’s a bigger thing: nding a way to communicate,” says Schwarz. “I’m very interested in combining things that are as far away from each other as possible, and how they can work together. How can you nd the connections that makes sense? The connections that are beautiful and artistic, and lead to a higher combination, not just a linear conversation? I believe this is a major step towards bringing two worlds together.”

The Vinyl version of the album will be available in a limited 4 colour special edition: